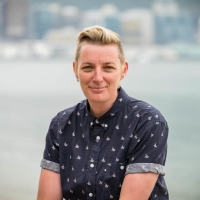 Ness Simons is a writer and director based in Wellington, New Zealand, with a passion for exploring stories that aren’t being told, and reflecting the world around her. With over eight years working in the local industry Ness has kept herself busy crewing on a range of projects and developing her own work, including 'Actually Alex' (NZFC Fresh 10) and two seasons of 'Pot Luck Webseries' (NZOA). Ness is the sole writer and director of all 12 episodes of 'Pot Luck', creating almost two and a half hours of screen content with over six million unique views across the series. 'Pot Luck' has been an official selection at more than a dozen international web festivals earning awards such as ‘Best Script’, ‘Best Directing’, ‘Best Actress’, 'Best LGBT' series at the Rome Web Awards 2017, and closer to home, sharing  ‘Best Ensemble NZ Narrative’ at NZWebFest 2018 with the fabulous ‘Baby Mama’s Club’ cast.

Ness was the Head Tutor at the New Zealand Film School for two years where she focused on giving emerging filmmakers the tools to have viable careers in the industry from both a personal and practical perspective, and the ability to pursue the telling of their own stories.

Working as a writer, director, and producer Ness is currently developing a range of projects with Robin Murphy under their 'Fired Up Productions' umbrella, including two new webseries with emerging talent, an animated documentary, a feature film, and a scripted TV series. Fired Up Productions are also self-distributing feature film ‘Births Deaths and Marriages’ in early 2020. The film is the self-funded debut feature of writer/director Bea Joblin and the theatrical release follows the film's official selection at the 2019 New Zealand International Film Festival.