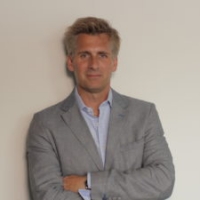 Simon Crawford Collins is one of the most experienced producers of successful television drama working in the UK.

Former Joint Managing Director of Kudos, Simon was instrumental in the company’s meteoric rise, having developed and produced its first hit show, the Bafta and multi-award winning international series Spooks, before going on to produce the company’s next hit series Hustle and then exec produce Ashes to Ashes. During his time at Kudos as producer, Head of Drama and finally Joint Managing Director, Simon developed and oversaw over 250 hours of channel defining series. Simon first cut his teeth in the film industry as a tea-making runner/driver on Matthew Vaughan’s first feature – The Innocent Sleep. He then proceeded through location managing and line producing in both film and TV (An Ideal Husband, Spiceworld, Poirot, The Railway Children to name a few).

In November 2011, Simon decided to start his own company Slim Film + Television, to follow his passion to be more closely involved again with the development and production of ground-breaking and entertaining series – and vitally to get back to the best part of the job, namely being in a room with inspirational writers generating great ideas.