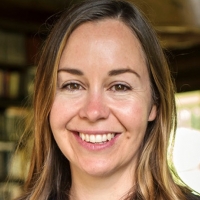 Since 2014 Good Pitch Australia has raised more than $14 million in philanthropic grants for the funding of 19 social impact documentaries and their impact campaigns, forging over 300 new collaborative cross-sectoral partnerships connecting the NGO and business sectors, education and policy leaders and the media in support of the impact campaigns aligned with each of their documentaries.

Malinda’s professional experience spans senior roles within the corporate, political, philanthropic and NGO sectors. She has been the recipient of a number of scholarships most recently, the Erasmus Mundus Scholarship from the European Commission (2010–2012) where she completed a double Masters in Public Policy & International Development (Democracy and Governance) with distinction.

Malinda is an Executive Producer of THE FINAL QUARTER (Dir. Ian Darling), 2040 (Dir. Damon Gameau) and LIFE AFTER THE OASIS (Dir. Sascha Ettinger Epstein). She has advised on business and strategic planning for a number of production and distribution companies including Madman, Hopscotch, Transmission, and Revolver. She is also the Executive Producer of the following projects in development — DEMOCRACY FOR SALE (Dir. Craig Reucassel) and BETWEEN US (Dir. Hollie Fifer and Ez Eldin Deng).

Malinda has served as a mentor for pitch and impact workshops including Sundance Institute Documentary Film Program, served on the jury of FIFO, Antenna and Environment Film Festivals, and a number of advisory boards including the Social Enterprise World Forum and AIDC. In 2016 Malinda was recognised as one of the Australian Financial Review/Westpac 100 Women of Influence.

Malinda is Deputy Chair of The Caledonia Foundation, a Board Member for Centre for Australian Progress and The Reichstein Foundation. In 2018, Malinda delivered a TEDx talk on how impact documentary story-telling can deliver better policy and strengthen democracy.