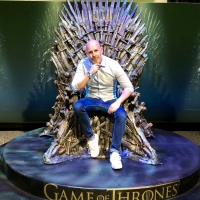 Shane Thompson has established himself as one of the motion picture industry’s leaders in the field of integrated marketing, a specialized role that straddles the worlds of production and marketing, touching all areas of the studio from Theatrical to Consumer Products, Games and Soundtrack Albums to Home Entertainment and Television.

Over the last 15 years Shane has overseen Integrated campaigns for six of the ten highest-grossing films in the studio’s history, including The Dark Knight, Wonder Woman and Aquaman, as well as such worldwide hits as Inception, A Star Is Born and Dunkirk, for a combined global box office of over $10 billion. In his current role at the studio as Vice President of Integrated Marketing, Thompson specializes in—but is not limited to—genre projects, with Joker, Birds of Prey and the Fantabulous Emancipation of One Harley Quinn, and Wonder Woman 1984 under his purview.

Shane was born and raised in Auckland, New Zealand, and graduated from the University of Auckland with a Bachelor of Arts in 1994. He currently supports a scholarship fund in his name at his former University assisting students who are the first in their family to seek a degree, as he was. It was while supporting himself during his University days that he received his first exposure to the entertainment industry, working as a featured extra on the long-running series Shortland Street.

Upon moving to London, England in 2000, Thompson began working in the art department of 4 Kids Entertainment, undertaking product development for the company in the midst of a record year thanks to their new global phenomenon, Pokémon. The following year, Thompson moved to Copyright Promotions, the licensing and promotions agency that managed the rights to a number of iconic properties, from LucasFilm and Marvel Comics to Sony Pictures and the iconic Mr. Men and Little Miss franchises. An avid comic book collector growing up, Thompson was able to capitalize on his passion and knowledge of the form and its many characters when he began work on his first big Hollywood film, Sony’s Spider-Man 2—just as the era of comic book-based movies was about to begin dominating the global box office.

In 2004, Warner Bros. approached Thompson about a behind-the-scenes role on a film they were about to begin shooting in London: Batman Begins. What began as a six-month contract to work on set throughout principal photography led to a full-time position at Warner Bros. headquarters in Burbank, California where he has lived since 2005.