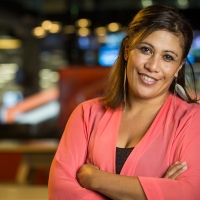 Nevak Rogers (Māori and Tongan descent) has almost 25 years experience in the media since starting out as a print and radio journalist for Mana magazine and RNZ's Mana News before transitioning into television in 2000 – freelance reporting for TVNZ, TV3 and MTS.

Over the past 19 years Nevak has worked for numerous production companies including Greenstone, Screentime, Eyeworks, Ponsonby, Tūmanako and Hula Haka Productions (as managing director). She has worked in a range of roles, from researcher and production manager to director and producer, and produced work for a range of genres including reality, documentary, entertainment, tamariki, studio, current affairs and live events. Career highlights include helping to produce and direct factual series The Missing Piece for TVNZ and Lost in Translation for MTS as well as several documentaries such as Ngā Tamatoa, Polynesian Panthers, Afa Kasi and Through the Lens (to commemorate Māori Television's tenth anniversary). Nevak also created, presented and produced Marae DIY, which won best reality series at the 2007 Qantas Media Awards.

After a long career in Māori Television and independent productions Nevak joined the Content Creation team at TVNZ in April 2018 where she was involved with heritage programmes such as Te Karere, Marae, Waka Huia and Tagata Pasifika, in addition to being the commissioner for new Māori and PI content for all TVNZ platforms. In JUne 2019 Nevak moved into the role of General Manager of Local Content at TVNZ.