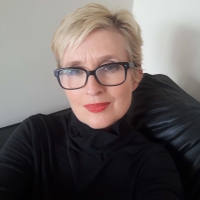 Irene Gardiner began her career as a journalist at Wellington's Dominion newspaper. In 1984, she became a publicist at the TVNZ publicity department at Avalon. An interest in television production developed from there, and in 1986 she became a trainee producer/director, working in Avalon's music unit on such shows as Ready to Roll, RTR New Releases, Heartbeat City, True Colours and Radio with Pictures.

In 1989, Gardiner set up an Auckland branch office for the music unit, then in 1990 moved from directing music shows to producing children's television, with the second season of 3.45 LIVE! , and The Bugs Bunny Show (1991). Short stints at the independent production companies Communicado (doing programme development and corporate videos) and The Gibson Group (arts series The Edge) followed.

Gardiner returned to TVNZ in 1994 to launch TV2's late night news programme Newsnight. Irreverent at a time when most things to do with news were still played very straight, the show featured the talents of a young Marcus Lush, and became something of a cult favourite after enduring initial resistance.

The following year, 1995, Gardiner took over the running of TVNZ's internal production unit in Auckland. With the trend towards independent production at that time, the TVNZ production unit consisted of just two programmes — Maggie's Garden Show and Open Home. Gardiner produced both shows, and also worked on programme development.

Over time, she built the TVNZ production unit up from just two programmes to around 30 titles a year, including popular series such as Taste New Zealand, Home Front, United Travel Getaway, Jo Seagar's Real Food for Real People, Mountain Dew on the Edge, Havoc and Newsboy's Sell-Out Tour and many one-off specials and documentaries.

After six years running the internal production unit, Gardiner moved on up to become Commissioning Editor at TV ONE, later moving on to Head of Commissioning across TV ONE and TV2. Noteworthy commissions during her time include the prestige documentary series Captain's Log, New Zealand music history Give it a Whirl, and history show Frontier of Dreams — plus populist titles such as Pioneer House, Border Patrol and Piha Rescue, and one-off documentaries including 1951, Children of Gallipoli, and No Mean Feat.

Gardiner left TVNZ in 2003 to work freelance as a television consultant and executive producer. Since then she has worked on the series How's Life?, the second season of Give It A Whirl, Eye to Eye with Willie Jackson, and Prime's 50 Years of New Zealand Television, plus many one-off documentaries.

In January 2009, Gardiner took up the role as Content Director of NZ On Screen. She left the job in late 2016.

Irene continues to executive produce, and has a sideline career as a radio and television media commentator.